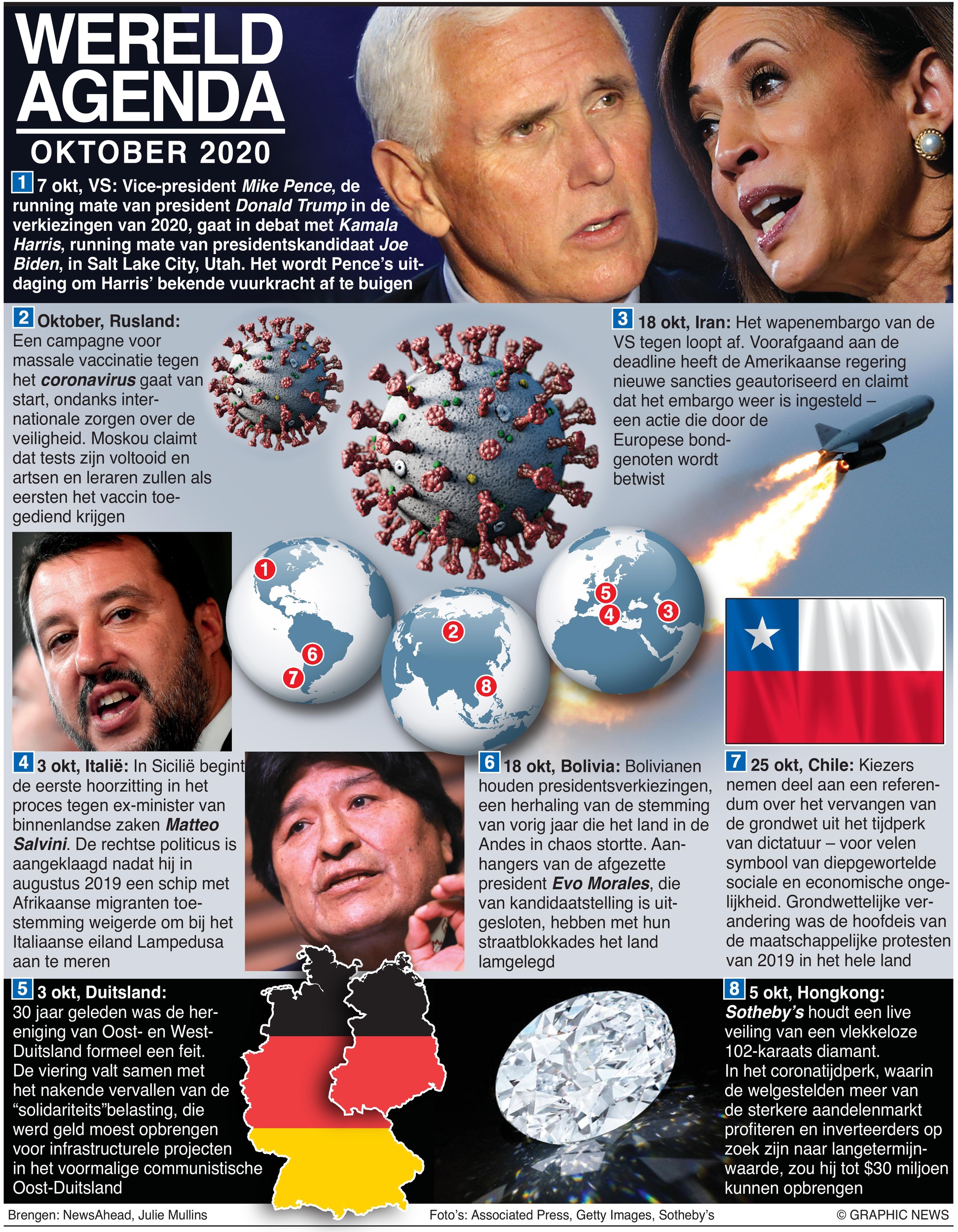 Forthcoming events that will shape the world in the month ahead. Events in October include the U.S. vice-presidential debate between Mike Pence and Kamala Harris, Russia’s mass vaccination campaign against coronavirus, a referendum on replacing Chile’s dictatorship-era constitution, and the 30th anniversary of Germany’s reunification.

Oct, Russia: A mass vaccination campaign against coronavirus is due to begin, amid international concerns about its safety. Moscow claims trials have been completed and doctors and teachers will be first to receive the vaccine.

Oct 3, Germany: The reunification of East and West was formally completed 30 years ago. The anniversary coincides with the imminent expiry of the “Solidarity” tax, introduced to raise money for infrastructure
projects in the former communist East Germany.

Oct 3, Italy: The first hearing in the trial of ex-interior minister Matteo Salvini opens in Sicily. The right-wing politician was charged after refusing to allow a ship carrying African migrants to land on the Italian island of Lampedusa in Aug 2019.

Oct 5, Hong Kong: Sotheby’s hold a live auction of a flawless 102-carat diamond. In the coronavirus era, as the wealthy benefit from stronger stock markets and investors look for long-term value, it could fetch up to $30 million.

Oct 18, Bolivia: Bolivians vote in a presidential election, a re-run of last year’s ballot which plunged the Andean country into turmoil. Supporters of ousted president Evo Morales, who is barred from standing again, have paralysed the nation with their street blockades.

Oct 18, Iran: The UN arms embargo against Iran is set to expire. Ahead
of the deadline, the U.S. administration has authorised new sanctions and claims that the embargo has been restored – a move its European allies dispute.

Oct 25, Chile: Voters take part in a referendum on replacing Chile’s dictatorship-era constitution – for many a symbol of entrenched social and economic inequality. Constitutional change was a key demand of social protests across the country in 2019.